The Brass Blossom has been a bit absent recently. And here is the reason why. While this post has nothing to do with crafts, recipes or pretty tables, it is and will be a positive tale.

On January 4th, 2015 my life forever changed. My boyfriend of 7+ years who I commonly refer to as “the boy” was critically injured in a motor vehicle accident. I received a call at 2 am from his best friend. It was my worst nightmare come true. Prior to that I had been in that place between sleep and awake.

In “Hook,” Tinkerbell tells Peter Pan that she will always love him in the place between sleep and awake. It’s that place where you are entirely relaxed but aware of both your dreams and reality. It’s that place where two worlds collide. And that’s where I was. I was longing for sleep but knowing in my gut that something was desperately wrong when I texted both the boy and his friend several times throughout the night and received no response.

After receiving the news in the darkest of night that he was being life flighted, I managed to gather myself enough to tuck Maude Pod into her kennel and pack an overnight bag. I packed an extra set of clothes, 4.5 pairs of socks and my bathroom bag. Pretty much all you could ever need.

The ensuing hours were dark, literally and physically. I have little recollection of the excruciating three-hour drive other than crying. Tears streamed down my face with each passing road sign. The boy’s sister held my undoubtably sweaty and tear streaked hand for a majority of the ride. But with each tear and each passing road sign we were that much closer to him.

The boy has now been in a coma for over a week. He suffered a traumatic brain injury as well as a broken ulna and a few other scrapes and bruises. From the moment I received the call to now I still question if this is real life. A good friend of ours described it perfectly when he said, “it’s a weird ride of sadness, helplessness and rage.” I am sad because I just miss him so much. I am helpless in that I cannot control anything other than my thoughts. And I am mad that I didn’t go with him. And mad that I didn’t just ask him to stay home like I had wanted to. And mad that other hospital beds in the ICU seem to empty while he remains in his. Every day I ride a roller-coaster of emotions that never seems to slow down.

Despite being here for almost two weeks it seems like no time at all. The days, hours and minutes have run together and I question my ability to complete basic tasks. The hospital cafeteria, the market and even ordering a coffee have seemed overwhelming. After a long morning a few days ago I simply needed to get out of the hospital. I was crying hysterically and sought any sense of normalcy. My mom who has been with me since day one loaded me up in the car and we turned on some country music and just drove.

It was drizzling and started to slush from the sky the further we drove. We passed hundreds of homes with cars parked outside and remnants of happy families stowed out of the weather. Several chimneys were filled with smoke. And it was refreshing. It was refreshing to know that despite that fact that I feel like this is not real life but much closer to living hell on occasions, that the world does go on. There are families and people who are happy, who are warm and who are entirely unaware of the devastating pain that I feel daily. It is nice to see that despite the current circumstance that we will one day be one of those families that is warm and tucked away in a cozy home baked in fire light and enjoying a drizzly afternoon.

The one thing that has held me on course throughout this ride is the boy. He is my rock and keeps me grounded when I am spinning. He is my everything. The pain of these circumstances penetrates slightly less and less each day as I hike the stairs to the ICU to spend another day with him. 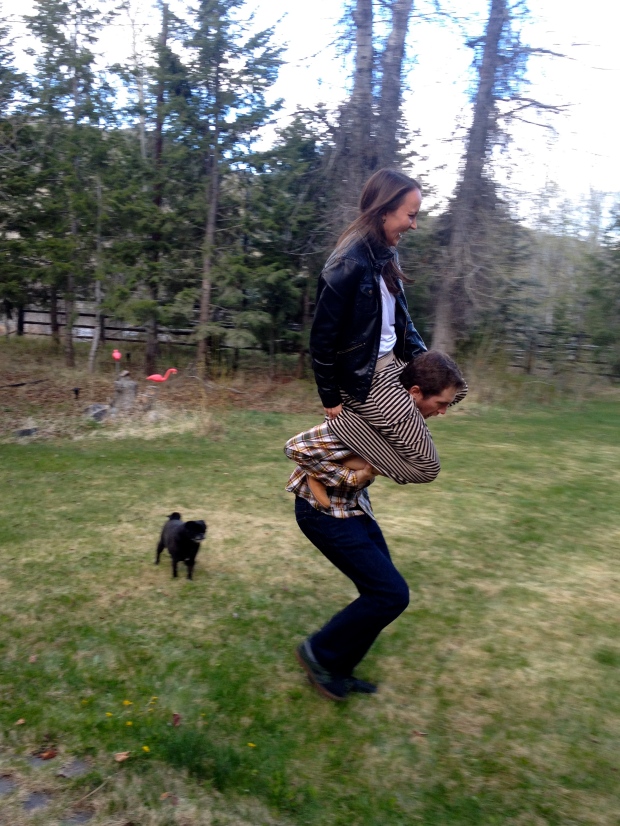 The day before the accident the boy told me he felt like he had been hunting too much. For anyone that knows him you probably think that he could never feel that way. It’s inconceivable, but true. He lives life to an extreme. But that is what I love about him. He lives life without balance. He will spend months on end spending every spare minute hunting with such gusto. To him it isn’t about the birds or the kill, it is about the adventure. And fully living the adventure at that. In a world where we all strive for the perfect balanced day from breakfast to a workout to an after dinner thai chi session, he throws balance out the window. I doubt he has ever or will ever have a balanced day in his life. He blows full force into everything without restraint.

So that day, on his day off from hunting, we did arts and crafts. No joke. I had asked if he would help me with a diy project that required far more power tool knowledge than I could ever muster and he was stoked. We turned a piece of firewood into a wooden birthday banner. His excitement fueled my excitement and he took over creating the majority of the decorations for the party, his creative juices running wild.

He is that type of man. He is as manly as they come yet he is the sweetest person I know. There isn’t anything that he wouldn’t do if I asked him to. I question him pretty much every day where his zipper is. Because if I had it my way I would simply just crawl inside him. I know, I know, it sounds bizarre. But considering my love of anatomy and my love for him, I cannot think of a place that I would rather be than warm inside the most caring, compassionate, light hearted and funny person I know. It would be like we were truly one.

Most days I feel that we have nearly become one. He is my person. He is the love of my life. He is the person that I have become so utterly comfortable with that there is nothing he cannot tell from a look at my face. He is the love of my reality and my dreams. I wake up next to him every morning (occasionally with a sprawled Maude Pod on her back in the middle, I know so romantic) and go to sleep with him only to hog the covers and bed each night, which he never complains about. I listen to him breathing, cling to him for warmth and watch his chest rise and fall while studying the so familiar face, moles and milky skin that I have come to know as my own.

And as I sit there in the ICU watching his familiar chest rise and fall and listening to him breathe I know he is in that place between sleep and awake. He has completely relaxed from the long day but as I hold his hand he intermittently moves his thumb every so slightly. I pray he can hold onto his dreams and slowly transition into what reality has become. He is there and I am there.  And we are there together continuing on to the next steps of our journey.

I will not only always love the boy in that majestic place between sleep and awake but I will also always love him in even the most horrendous of realities. And it is in this new reality that I have grown ever so slightly accustomed to that I will be waiting for him. Waiting for him to wake up from his sweet dreams and loving him even more.

And that is where I pause my story. As of right now, The Brass Blossom most likely wont have many posts coming in the near future. I may post more about the boy’s and my journey, depending on where the road takes us.

As well, Krista has been nothing but “my person” during this time. She took the ultimate test of commitment and vowed to be my “Brass Blossom Boyfriend” for now. That is true friendship right there. I want to thank everyone from the bottom of my heart who has supported the boy, our families and me during this time. The momentous amount of love, support and prayers that we have received has gotten us through the beginning of what is going to be a wonderful recovery.

To follow the boy’s journey more frequently, check out: http://www.caringbridge.org/visit/teamcasey

As well, a fund has been started to aid in his recovery that has already grown astronomically for which I cannot even begin to express my gratitude and thanks to each and every donor: http://www.gofundme.com/caseyhawkes

hello & welcome to the brass blossom!